The impact of Voice Lab in educational contexts 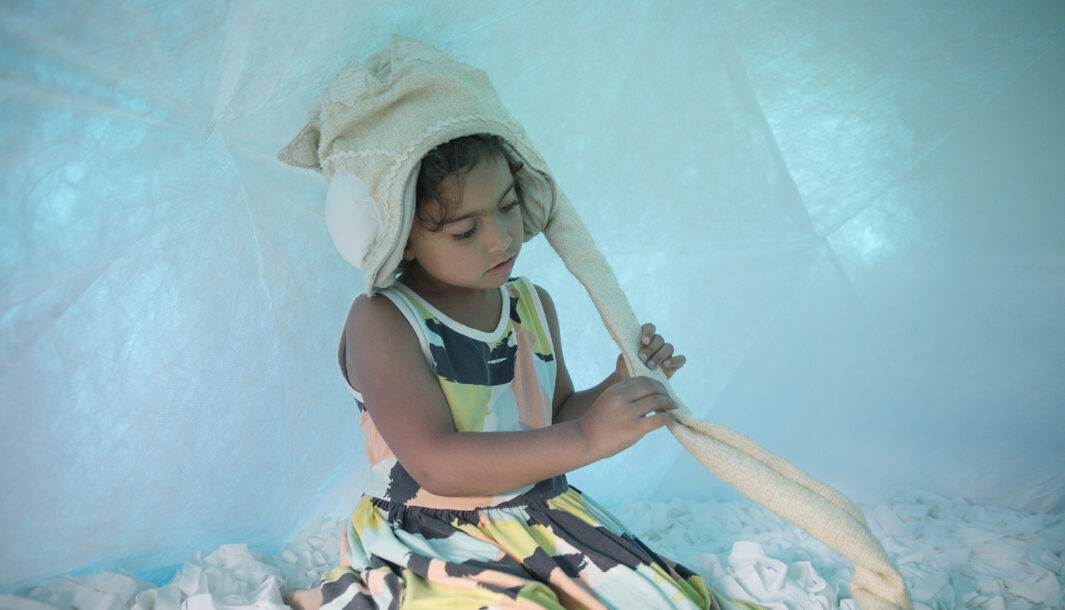 Voice Lab was originally created as an evaluative tool, but through its use in educational contexts it has revealed its ability to provide a greater impact and more profound benefits for students and educators alike.

Voice Lab is a magical, theatrical experience created by Polyglot Theatre where individual children are welcomed into a carefully designed, calming space. Once inside they are invited to share their opinions with the space itself, through a conversation with a disembodied voice that is genuinely interested in what they have to say.

As an evaluative tool, Voice Lab’s benefit was always clear. Through its unique elements of time, attention, space and design, we are able to garner meaningful opinions and unfiltered feedback on any number of subjects. In an educational context this allows us to see what is and isn’t working for individual students, to gauge their interest in a process or project at various points in time, and to identify problems or strengths that educators may not have known about prior to Voice Lab’s sessions.

In our work with Anglicare and Frankston’s Communities For Children, we used Voice Lab to great effect in evaluating students’ attitudes, fears and strengths around transition from kinder to primary school and from primary to secondary school. This longitudinal evaluation gathered honest and meaningful data that was in turn fed directly into educators’ processes and the strategic planning of the schools and organisations involved.

Additionally, what arose in this context was how the cumulative individual responses gave us the ability to build a bigger picture of the group, allowing us to evaluate (to a certain extent) the current and former standing of the class. Through questions and prompting around interactions and relationships with fellow classmates, we gained tangible knowledge of the group dynamic and how it was or wasn’t working for specific individuals. From the cumulative individual interviews a picture emerged of how a class related to one another, their positivity or negativity towards things, and how that dynamic changed over time. This ability for Voice Lab to capture deeply individual opinions while simultaneously revealing a larger group dynamic is something that could only have emerged in educational contexts and the unique dynamics that inhabit classrooms.

When Voice Lab is used in schools, one of the biggest benefits that we’ve discovered is the ability it gives educators to peer behind the curtain of bravado and lift the mask that students sometimes wear. Through the solo experience of a Voice Lab session, students are able to sit alone with their thoughts and respond to questions in their own time, removed from the influence of teachers, parents or peers. As a result, Voice Lab is able to obtain genuine opinions from the participant’s ‘truer self.’ This allows educators and wellbeing officers to see what is really going on for that individual; sentiments that can be entirely different to how the same student presents in the classroom or playground. Looking beneath the veil of peer influence and social filters means that educators and wellbeing officers can identify and reveal the scale of bullying behaviours, issues at home or other vulnerable students in need of help. Wellbeing officers are then able to identify and address these issues on the fly and make immediate changes for those students who need it.

This unveiling also works two-fold, in that the responses gleaned by Voice Lab can allow for expectations and preconceptions of the student to be blown out of the water. Indeed it is often the case that children who are deemed by their educators or carers as unable to participate properly, whether that be due to special needs or being considered troublesome or disengaged, are the ones who thrive in Voice Lab, who stay the longest and have the most to say.

“…from the information that’s come from the honest responses from students, their true stories at that time, there’s some really contradictory knowledge. And it kind of like, pokes educators to think ‘what you think you know is not always all the story’ and to keep being open-minded.” Keery Gibson, Former Community Engagement, Frankston North Schools Consortia.

The strongest discovery that we made when conducting sessions in a school environment was the importance and value of Voice Lab as a therapeutic space for students’ introspection, reflection and release. This functioned in a number of ways. For some it was simply having the time and space to talk about how they were feeling that offered the most tangible benefit. Many of the students we talk to are extremely grateful for the chance to express how they feel about things, and have those opinions not only listened to but heard and cared about. On this point we have received many instances of unprompted thanks from students for being allowed the chance to express how they feel – a chance that they may not get anywhere else in their lives at that time.

The calming, womb-like, neutral design of Voice Lab coupled with the solo experience allows it to become a place of safety and tranquillity. An oasis. An escape from the chaos of the classroom; a place that can be so full of noise and drama that to be heard is near to impossible and at times even discouraged. Many students do not want to leave the space once a session has finished, as to do so is to return from the blissful bubble of Voice Lab to the abrasive assault of the real world. For some students who had rarely spoken in the classroom, this bubble of tranquillity allowed them to finally find that quiet space where they felt safe enough to speak and were able to be heard.

“We had a couple of students who in the classroom were not talking at all… and when they went into Voice Lab it was like it was their space where they could talk and they could let out every thought and feeling that they had. It was safe for them, it was comfortable.” Nicole Bechaz, Kindergarten Teacher and Team Leader, Community Kinders Plus.

In a broader sense, the therapeutic impact that a space like this can have on young people is potentially even larger and more intangible. Opening up to the idea and practice of talking about how you feel, taking the time to think, listening and being listened to – Voice Lab teaches students to view all of these things as having value. What long term individual and indeed societal benefits are there for students who are exposed to such ideas of emotional consciousness and development? It seems obvious that in this context school should be as much about social and emotional education as it is about academic success, and from what we have seen in our work with Voice Lab, children are hungry for it.

The grand design of Voice Lab is to raise the volume on children’s voices so that they are at the same level as the adult voices that surround them. In the context of an educational setting, the value in the voice of the child having an impact on the structures that they are governed by cannot be overstated. For children who are contained in a highly structured system that tells them exactly what to do and governs much of their existence for over a decade, it is easy to see the value in those children witnessing their own voices having an impact on the systems surrounding them. Expanding this notion, it is not hard to see the positive impact that such a realisation could have on their future mindset, and that in turn having a positive impact on society in generations to come.

The benefits of this impacts the child, educators and system simultaneously. The child feels heard and valued and realises the power that their voice can have on structures that they had previously experienced as being out of their control. Educators are able to adjust their teaching environment and tactics for the immediate and targeted benefit of their students. And the system as a whole is able to incorporate the needs and concerns of its population directly into its strategic planning to optimise processes and improve wellbeing across the board.

The use of Voice Lab in educational contexts has impacted all of the participants, educators and organisations involved. At the same time it has also greatly benefited the Voice Lab project itself; revealing new uses and facilitating unintended discoveries and future provocations. As evidence for the empowerment of children grows and we see the trend of businesses, local councils and other organisations moving more towards incorporating child-inclusive practices and consultation into their models of operation, it is all the more important that schools and educational organisations utilise and nurture the vast resource of brilliantly individual young minds at their fingertips.

UN Convention On The Rights of the Child (Simplified): https://www.unicef.org.au/Upload/UNICEF/Media/Our%20work/childfriendlycrc.pdf

Lachlan MacLeod is a performer, puppeteer, musician and videographer who has worked as a part of Polyglot Theatre’s core creative team for over 10 years. He is the co-creator and operator of Voice Lab and is consistently blown away by the opportunities it continues to present him as an artist, the children who participate in it and the broader world who are able to feel its beautiful glow.

When the current state of world affairs seems like cause for despair, Lachlan has only to think of the hundreds of incredible voices he has heard through Voice Lab to rest assured that there is hope to come in the world. Our future is in good hands.