When the World Turns

A fantastical experience for young people with complex disabilities and their families, leading a participating audience into a sensory state of mind and body. A collaboration between Polyglot Theatre (Aus) and Oily Cart (UK)

When we are still we can feel the world turning.

You are invited to come on an adventure that will take you into the heart of a wondrous landscape, to become part of a wild place of the senses. Your family can see, hear, touch and smell this strange, rustling, breathing world as it reveals itself. Starting in your own home, this adventure will be one you remember, full of surprise and wonder.

In a landscape of living foliage, through sound, light, scents and shadows, When the World Turns playfully explores our connection with each other and with the world. In this place humans are equal parts of a new, inclusive ecology. 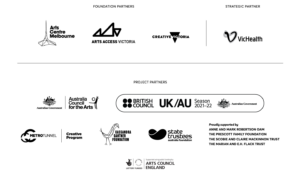 The premiere season in September 2022 was generously sponsored by ecoDynamics.

Pre-rig, then day 1 bump in, day 2 tech and performance

Must be in an accessible, flexible space. A black box or studio theatre could be suitable.

Up to 40 people per performance.

Got a question about When the World Turns?

Find a Polyglot show for your venue, festival or event.

Boats engages children and their families in accessible play that transforms familiar space into something wild, unpredictable and fun. 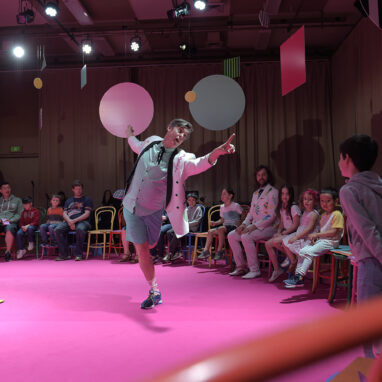 Invisible Orchestra is an exciting musical experiment where beautiful sounds are created with the body in the most unconventional and hilarious ways.