“The compelling and mysterious city of their imaginations” 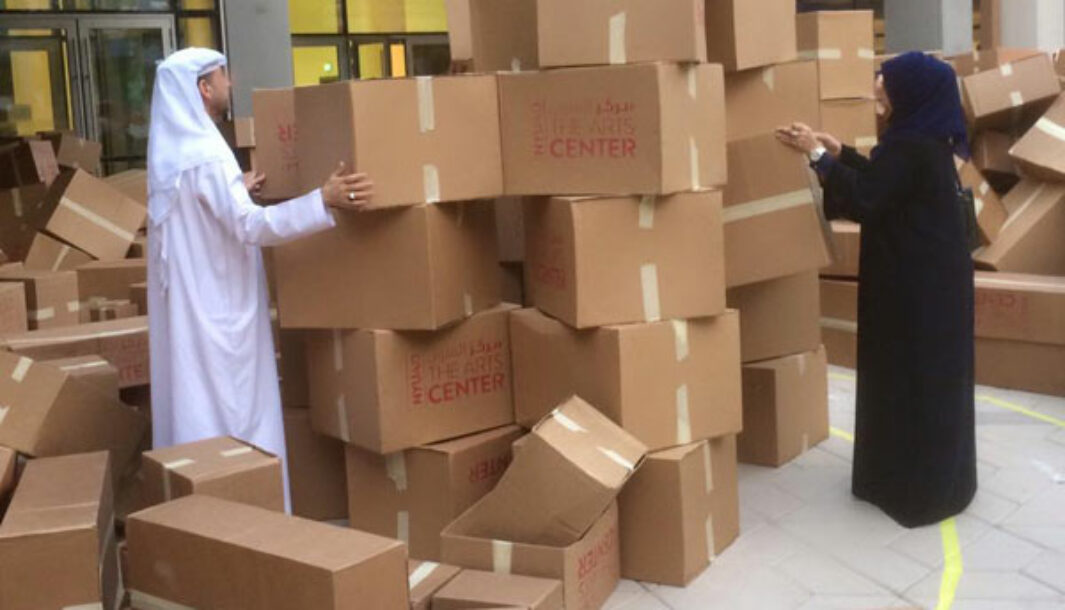 In 2015 We Built This City went to Abu Dhabi in the United Arab Emirates. The show was set up outside in the sweltering heat on the grounds of New York University which is surrounded by flat expansive desert sand. Expats from all around the world and local Emirates children and their families visited. Children from the north, south, east and west of this big wide world speaking their first and second or third language of English delved into the cardboard box world. They built cubbies, towers, tunnels, alleys, and imaginative play spaces amidst a sprawl of hundreds and hundreds of boxes. There was squealing and laughter and passionate negotiation between siblings, friends and adults as boxes were randomly placed or considerately assigned to build the compelling and mysterious city of their imaginations.

I recall one young girl of about 10yr who I had connected with earlier in the day came running up to me urging me to come quickly as there was a problem and she and her fellow builders did not know what to do. I followed her through the maze of boxes matching her pressing pace. When we arrived in the back corner of the city she and her friends and another group of kids showed me their two joining cubbies and simultaneously exploded into a cacophony of explanation of their dilemma. Which in short, boiled down to the question ‘Our neighbours want to visit our cubby and we want to go in theirs, but how do we know if we can trust that they won’t wreck it if we let them in.’ What a great question. I threw it straight back at them – Well how do you work out trust? How do you work this stuff out when you’re at home? How do you keep building when you share a wall and share all the boxes?

All I had to do as an artist and as a witnessing adult is be present, acknowledge the difficulty, and ask the right questions. Within a few short minutes they reached agreement to commit, trust, and respect each other’s buildings that they had passionately invested in. If only our political and business leaders could follow these few simple and honourable principles when negotiating land and resources, and consider the impact on people. It was a wonderful micro moment with much larger resonances that show just how much children can be leaders.