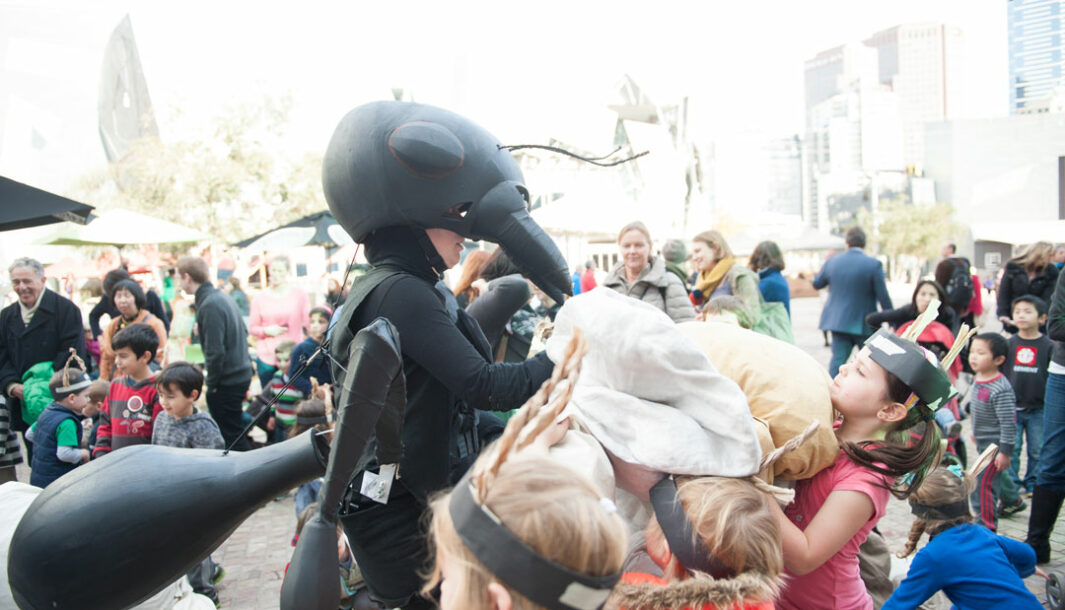 For 30 years, Polyglot Theatre has made interactive experiences for and, more importantly, with children.

The delight of Ants, a free event at Federation Square, is largely generated by the young kids who attend, and in this respect is typical of the company’s commitment to playful participation, its sense that children are instinctively creative and should guide the work rather be dictated to by it.

Giant insects are a bit unnerving even to adults, so when three of them emerged in the crowded square, there was understandable apprehension from my five-year-old nephew. The prospect of performers using full body puppetry (anatomically realistic, complete with insectile clicks and whirrs) proved too much at first.

Curiosity kills the scaredy-cat, though. Ignoring the humans around them, the ants began to collect and carry crumbs (cushions of various sizes) – dragging them into piles, arranging them in trails – and it didn’t take long for the children to swarm in and start helping.

There’s an antenna-making workshop in the atrium, to make them look more like little worker ants, and the loosely structured play is really only suggested by the parameters of the event. Most of the fun stuff is up to the children themselves.

The immersive experience evolved into free-form by the time the ants disappeared without fanfare, and there were groups of kids jumping into large crumb piles, having (good-naturd, harmless) crumb play-fights, and so on.

Polyglot really knows its audience. Ants isn’t ground-breaking in the way its show for mothers and children, How High The Sky, was at last year’s Melbourne Festival, but it takes on a life of its own. That night, apparently, all the cushions in my sister’s house were being creatively deployed.